ALCOHOL IN THE MARAE

Pre-European Māori were one of very societies in the world not to produce their own waipiro / alcohol.

Many factors in our society (racism, availability of alcohol, deprivation, access to services, etc) are involved in Māori being more likely to drink heavily.

Rates of hazardous drinking among Māori women continue to increase.

Māori are more likely to experience alcohol-related harm than non-Māori. Young Māori males are more negatively impacted by living in close proximity to alcohol outlets than European young males - the reason for this is currently unknown.

Biological differences between Māori and non-Māori do not explain the inequities that Māori face in relation to alcohol - wider society should be the focus in explaining the differences in harm.

It is important to know that pre-European Māori were one of the few known societies not to have manufactured or used psychoactive substances.

Many Māori petitioned Parliament for the total prohibition of alcohol, realising the harm it was causing to their communities.

There is an excellent resource on the history of alcohol and Māori, click the button below.

A HISTORY OF MAORI AND ALCOHOL

Trends in alcohol consumption among Māori

From 2011/12 to 2015/16, hazardous consumption remained stable among Māori men but increased substantially among Māori women.

In 2012/13, Māori women had a rate of hazardous drinking equal to that of European/other men.

Among men, the rates (%) of hazardous drinking are below:

Among women, the rates (%) of hazardous drinking are below:

These changes are shown below: 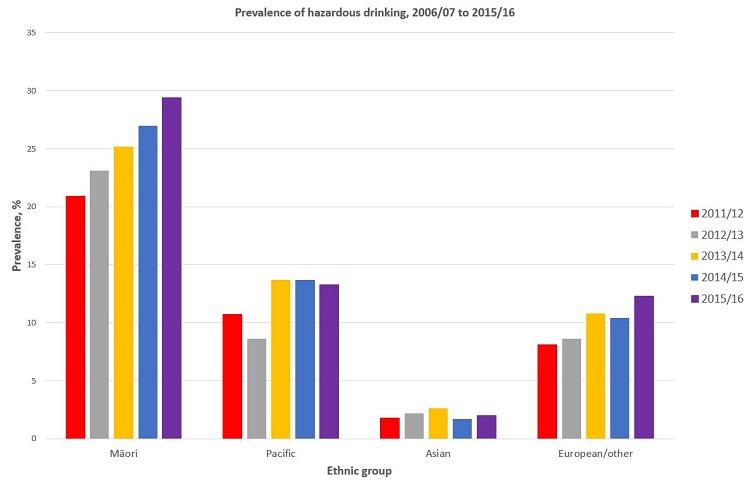 The survey question changed in 2015/16 - but what can be seen is that the rates of hazardous drinking remain high among Māori men and women.

Among men, the rate/prevalence (%) of hazardous drinking is shown below:

Among women, the rate/prevalence (%) of hazardous drinking is shown below:

Inequities between Māori and non-Māori

In 2016/17, there were large differences in the prevalence of hazardous drinking between Māori and non-Māori:

Māori suffer extraordinary harm from alcohol - from their own drinking and from the drinking of others:

The social, economic and physical environment is unjust

Economic deprivation plays a major role in drinking and harm. Māori are more likely to experience deprivation than non-Māori.

New Zealand Secondary school students who report experiencing ethnic discrimination are almost twice as likely to report binge drinking as those who do not [13].

The effects of colonisation, institutional and structural biases are likely to play major roles in Māori experiencing disproportionately more harm from their drinking and ability to improve the socio-economic and physical conditions of daily life.

Māori are more likely to live in communities saturated with alcohol outlets. Outlets face stiff competition so will often lower their prices and stay open for longer.

This increased availability of cheap alcohol and longer opening hours is likely to play a major role in Māori suffering more alcohol-related harm.

GET PREPARED >
TAKE ACTION >
CASE STUDY >
Alcohol is a major factor contributing to health inequities Places & Events Our drinking culture
Do you like this page?
Tweet