On the spot - take action immediately

Stopping someone from getting behind the wheel after they’ve been drinking could save their life and the lives of innocent others.

If it is an emergency - call 111 and provide the details to emergency services.

If it is safe to do so, take their keys off them and offer to find them a safe ride home.

If the risk of drink driving is associated with a licensed premise - advise the licensee or duty manager of the risk and remind them of their duties to support safe transport options.

If the person has been drinking on a licensed premise and appears intoxicated then report the incident to the local licensing team and/or Police.  See the Licensing section for more information.

Be a positive role model

Always drive sober and encourage members of your family/whanau to do likewise.

If you are hosting a family/whanau gathering or event, be a responsible host – e.g. make it alcohol-free, or have a range of alcohol-free options available, arrange a place for people to stay or a safe ride home if they’ve been drinking.  See Places and Events for more information on planning events.

Take opportunities as they arise to discuss drink-driving, its risks and consequences with your family/whanau.

Develop some safety protocols/kawa with your family/whānau.  These can focus on how to avoid the risks of drinking and driving, and having a plan to get home safely should that be necessary.

Start a group or if you are already part of a group or network you can plan initiatives to reduce drinking and driving in your community. ​For more information on doing this see Mobilising Others.

Assist people to get the help they need

If you have any concerns about someone you know who is drinking and driving assist them or their family to get professional help.

Help can be reached at your GP/local medical centre, school counsellor or local Community Alcohol and Drug Service.

The Alcohol and Drug Helpline is a useful starting point for anyone who has concerns about their own or others drinking. They will be able to support you towards the best course of action and local services including youth services - 0800 787 797.

Advocate to increase the number of random breath tests

To ensure our drink driving limits are effective, we need to enforce them. However, random breath test numbers have been declining substantially and we need to increase them to the point of one test per year per licensed driver. That would mean around 3 million tests per year. A lot more than what we are currently doing.

Speak to your local MP about this issue.

Change the wider environment to change our drinking culture

By reducing the amount of alcohol consumed, we can help reduce drink driving.

The most effective measures to reduce the amount we drink are listed below. Read each section to find out how you can take action on these environmental factors that support low-risk drinking.

You can mobilise others to:

Impairment can occur at very low levels of consumption. The risk of crashing increases with every drink.

Fatigue multiplies the risk of an accident.

No alcohol is the safest option if you are going to be driving a vehicle, boat or operating other machinery.

It is an offence to drive a vehicle over the legal alcohol limits in New Zealand.  The legal limits are;

For more information on limits and penalties for driving over the limit see http://www.transport.govt.nz/land/bloodalcoholqanda/

Alcohol interlocks are useful in assisting those who continue to drink and drive. These can be used in conjunction with treatment options and can be used by Judges in sentencing those convicted of drink-driving.

New Zealand has a Vision Zero approach to road deaths - where no-one is killed or seriously injured in road crashes. This cannot be achieved without strong action on alcohol.

Drink driving doesn't just harm the driver - passengers and other road users (including pedestrians) are also killed or injured in alcohol-related road crashes.

Between 2017 and 2019, for every 100 alcohol or drug-impaired drivers or riders who died in road crashes, 27 of their passengers and 32 other road users died with them.

The risk of crashing increases with the amount of alcohol in the blood at the time of driving. Road traffic crashes involving alcohol are more likely to result in death or severe injuries.

Alcohol use causes impairment when driving.

Road traffic crashes involving alcohol are more likely to be fatal or result in severe injuries.

The risk of crashing increases with the amount of alcohol in the blood at the time of driving.  For New Zealanders aged 20 years or over, it is illegal to drive with a blood alcohol concentration of 0.05mg alcohol per 100ml of blood. For drivers under 20 years, there is a zero tolerance to alcohol in the blood.

Drivers aged 20-29 with a BAC of 0.05mg/100ml are about 17 times more likely to be involved in a fatal crash than their sober counterpart. Adults aged over 30 years are about 6 times as likely.

In 2019, 160 people died and 391 were seriously injured in crashes where alcohol/drugs were a contributing factor. 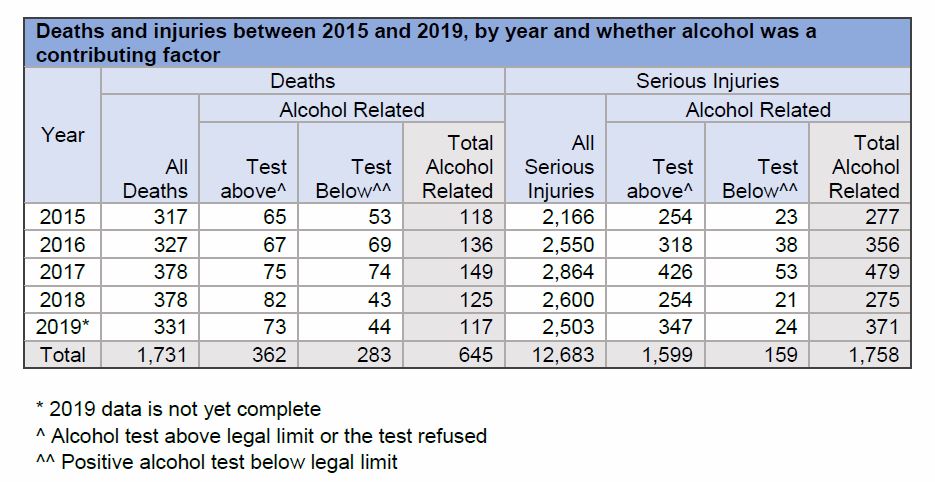 What is the financial cost of drink driving?

For the three years to 2012, it was estimated that the social cost of alcohol-related crashes (for drivers over 20 years) in New Zealand was $446 million. This figure is in 2013 dollars.

New Zealand's Road to Zero strategy adopts the Vision Zero approach to road deaths. Strong drink driving laws and adequate enforcement of them are central to achieving this goal.

There are technological differences in reporting that may explain much of the lower number of tests carried out in the 2015/16 period. The data above are obtained from NZ Police Annual reports.

Changes in the way in which road policing is structured in a number of Police districts has resulted in the disestablishment of dedicated impairment testing teams. This may have also contributed to a reduction in test volumes. There has also been implementation of a more targeted, intelligence-based approach to testing.

With regards to convictions for drink driving (or exceeding limit for other substances), the number of convictions has declined in recent years. The lower numbers of random breath tests being carried out is likely to play a role in this. Data below were obtained from NZ.Stat.

In 2012/2013, it was found that there were high levels of reoffending, with around half of those convicted having at least one previous drink-drive conviction over their lifetime of driving.

It is great that you want to take action to protect your family / whānau. Here's some tips to start your journey.

Alcohol is a toxin – This is particularly important in relation to children and young people. They will be more affected by any alcohol consumption they consume. Higher strength alcohol products, such as spirits, present a greater risk in relation to poisoning.

Alcohol products and packaging are part of the marketing – Alcohol producers and marketers aim to make their products as appealing as possible to current and potential consumers. Young peoples’ exposure to alcohol marketing is known to speed up the onset of drinking and increase the amounts consumed by those already drinking.

Almost every New Zealand drinker consumes alcohol in their home or in another’s home. The COVID-19 pandemic has likely embedded home drinking for many New Zealanders.

Family homes play a major role in children and young person's exposure to alcohol. Many parents report being drunk or tipsy in front of their children.

Children report negative feelings when being around their parents who are drinking.

The home may also be an avenue for exposure to alcohol sponsorship - through merchandise / posters / etc.

There are many actions that can be taken at home to protect family/whānau members and visitors.

Alcohol in the home

Therefore, the home has a significant influence on children's and young people's experiences and exposures to alcohol. How they see drinking happen at home will become their expectations and own norms for drinking.

As seen in the young people section of this website, adolescents commonly report consuming alcohol with friends (83%) followed by family (53%).  Many more students who live in deprived neighbourhoods (59%) report drinking with their family when compared to those living in the least deprived neighbourhood (49%).

In this study, almost one-third (29%) of parents thought it was okay to get drink in front of their kids as long as it did not happen regularly.  The same survey also found that children could feel negative towards parents' drinking behaviours. For example, around one in five (18%) of children had felt embarasssed and one in 10 (11%) had felt worried.

Last but not least, it is known that one of the factors that contributes to earlier drinking and progression to binge drinking in adolescents is owning alcohol-branded merchandise in homes. This merchandise is commonly found in home settings, as shown in New Zealand research. Please check out the subsection on advertising and sponsorship for more information about exposure to alcohol marketing in our home.

We need to address the environmental factors that often cause a disproportionate impact of alcohol-related harm among Pacific communities. For example, alcohol is widely accessible where Pacific people live. Other factors include alcohol sponsorship in sport/club events. Therefore, it is important to also check out other sections on ActionPoint and take action accordingly.

In additional to addressing the environmental factors, check out the following models/projects that utilise church settings to promote healthy lifestyles.

This includes Pacific Health models namely the Fonua model and the The Fonofale model. In the Auckland region, there are two major health promotion projects in Pacific churches. These models or projects often take a comprehensive approach and encourage partnership between church leaders, youth leaders, the whole congregation and health promoters. Therefore, it is important for you to talk to your local Public Health Unit at your District Health Board.

In the Auckland region, there are two major health promotion projects in Pacific churches:

Apart from seeking funding from your own denomination, you may consider applying for funding from charities commissions to support your projects (if your church is registered as a charity) - APPLYING FOR FUNDING

You may also talk to your local Public Health Unit for collaboration and funding opportunities.

Alcohol can be a sensitive issue in church as it links to its consequences such as intoxication, violence and sexual abuse.

In the 2018 Census, 77% of Pacific people said they were associated with a religion or a religious group. Pacific people have strong social and cultural ties with their family, churches and community. Active involvement in church protects young Pacific people from binge drinking.

Churches are a good setting to engage Pacific people in activities to enhance wellbeing.

Posted in Alcohol in the Marae

As described by Forster and Ratima, it is important that any programme:

If you want to engage your Marae in reducing alcohol-related harm, think about the following:

Examples of Marae policies on alcohol

Following tikanga wananga (a discussion on Marae customs and protocols), Marae have implemented policies that include:

These are just a few of the options to choose from.

Get help for those in need

​There are dedicated kaupapa Māori alcohol and other drug services available. Click here to find services in your location.