Uncap Our Potential is a digital campaign that is underpinned by a values and strengths-based approached. It invites New Zealanders to truly imagine the amazing potential we can reach and share, when our nation has less alcohol harm.

The campaign kicks off with two digital stories on social media, with New Zealanders working at the forefront of alcohol harm sharing their vision of a future with less harm. These can be found on the campaign website (click the logo below for visiting the website). Both videos have Te Reo Māori and English subtitles.

Everything we care about will start to improve. With less alcohol harm, we can improve our mental wellbeing, reduce suicide, have safer roads and communities, less family harm, and improve our physical health (e.g. fewer injuries and cancers).

We can open up space to enable genuine connection, conversations, trust and creativity. We can identify evidence-based pathways to this vision, such as supporting effective alcohol pricing policies.

Pro-equity policies must be prioritised to uphold our obligations to Te Tiriti o Waitangi, ending the longstanding inequities in alcohol-related harm between Māori and non-Māori.

We sincerely hope that you also share the vision to uncap our potential. In the words of one New Zealander in our videos, "together we can make it a reality". Please support by sharing the digital resources on the campaign website. Please also like and share on any of our social media platforms:

Protect our communities from alcohol advertising

We are calling on you to protect our communities from alcohol advertising:

The Signage Bylaw 2015 is currently being reviewed by the Auckland Council’s Social Policy and Bylaws Unit. This review presents an opportunity to protect communities from alcohol advertising Auckland.

The review findings will be presented to Auckland Council’s new regulatory committee and to the Board of Auckland Transport after the 2019 local elections. A decision will then be made on the future of the bylaw.

Exposure to alcohol advertising can lead to children and young people starting to drink alcohol earlier and drinking larger amounts of alcohol.(1,2) New Zealand research shows children are frequently exposed to alcohol advertising, commonly via bottle stores and other alcohol outlets.(3) There are significant inequities in this harmful exposure, with tamariki Māori having much higher levels of exposure.

Bottle stores not complying with the Signage Bylaw 2015

The Auckland Signage Bylaw contains generic regulations for signage, by sign type and unitary plan zone.(5) Alcohol signage is regarded as no different to other signage, despite the significant harm from alcohol advertising exposure.

Other mechanisms are ineffective

New Zealand has a weak, voluntary self-regulatory code as the main protection against alcohol advertising.(8) In relation to alcohol outlets, this alcohol industry code centres on the content of each advertisement and fails to address both the amount of alcohol advertising that communities are exposed to and the location of advertising relative to sensitive sites (e.g. schools).

Despite the Law Commission Review (9) and Ministerial Forum on Alcohol Advertising and Sponsorship,(10) making strong recommendations to restrict advertising exposure in communities (including at licensed premises) there has been no Government action to date.

Given the harms associated with alcohol advertising, the known exposure among young people, the lack of protection offered by the New Zealand’s self-regulatory system, and the widespread non-compliance of bottle stores with the Signage Bylaw, leadership is urgently needed from civic and community leaders.

Show your support by signing on to the resolution today! 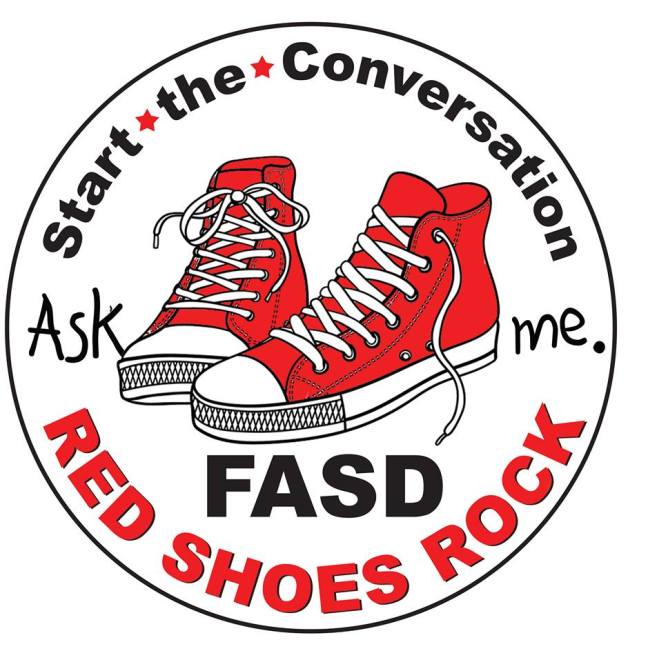 Red Shoes Rock! is about every day kiwis stepping out in red shoes to build awareness of Fetal Alcohol Spectrum Disorder (FASD) during September. RJ Formanek is an adult living with FASD. Formanek sparked Red Shoes Rock! five years ago when he decided to wear red shoes to stand out from the crowd, get people talking, and make FASD visible - now its gone global!

Join us during FASD awareness month and help continue the conversation.

Alcohol Healthwatch has developed FASD messages you can use on your social media for FASD Awareness Day. 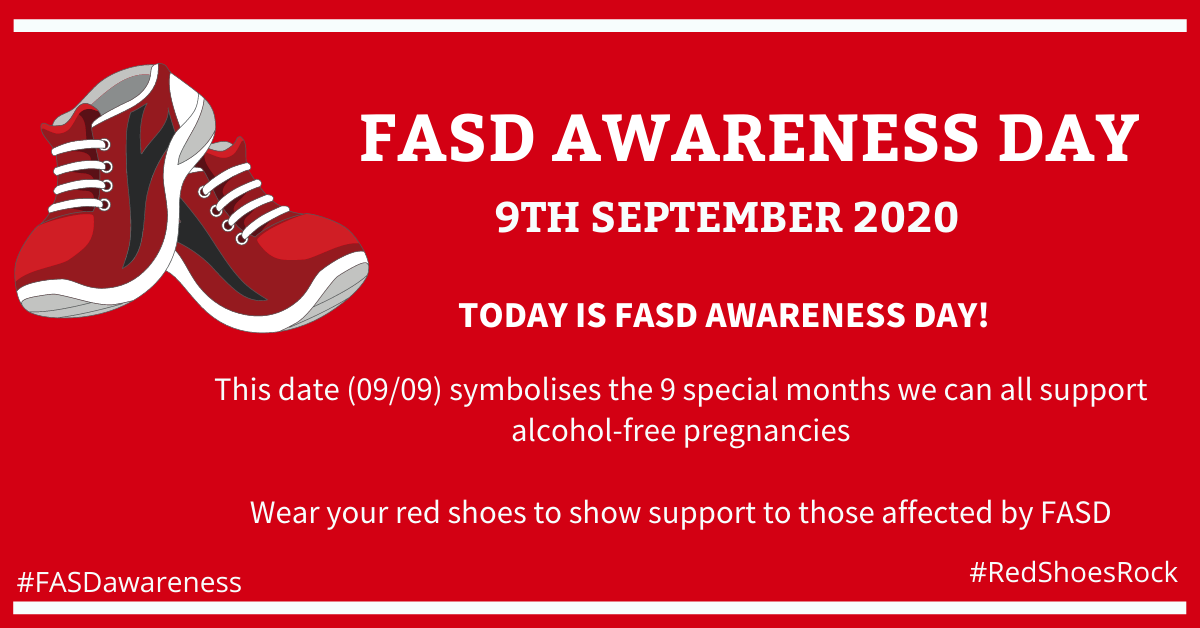 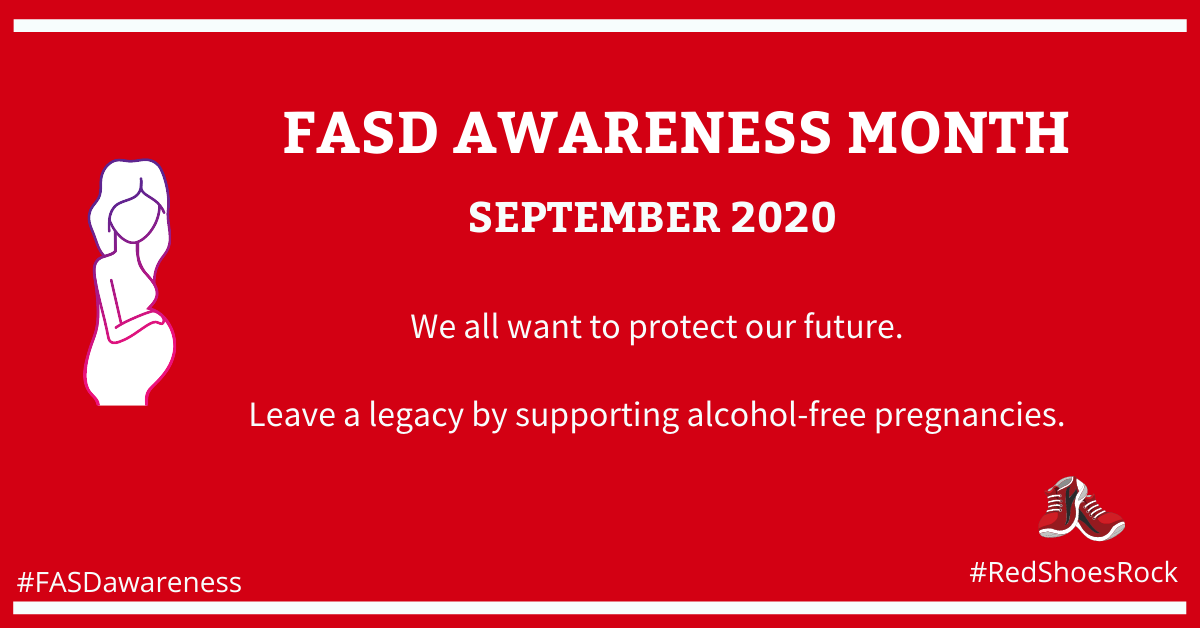 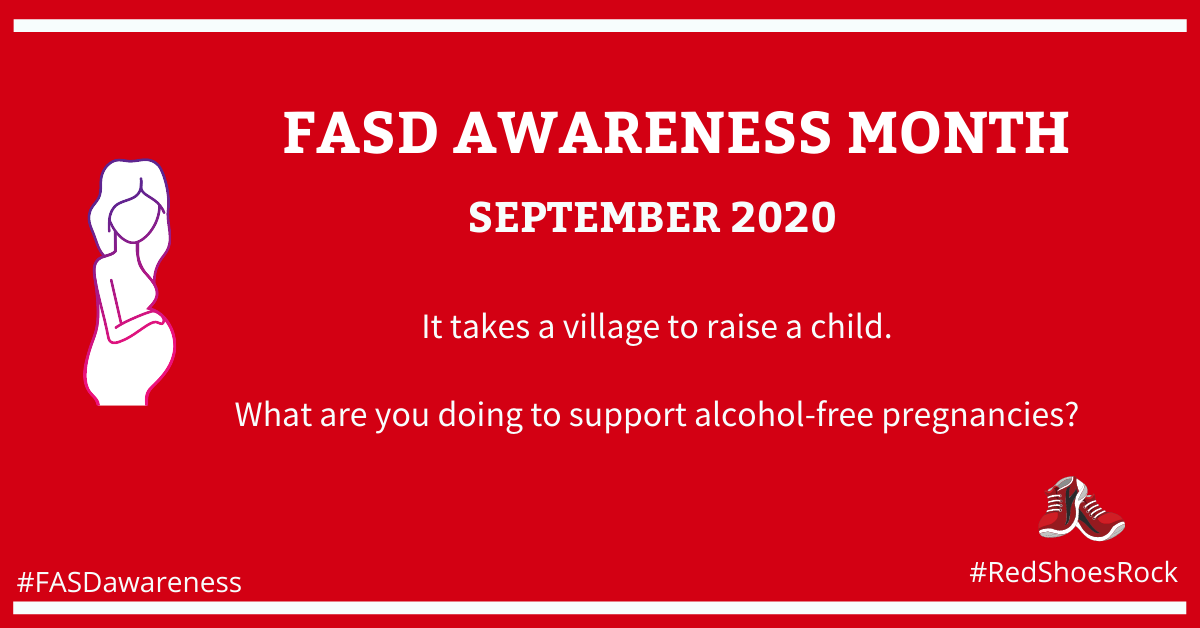 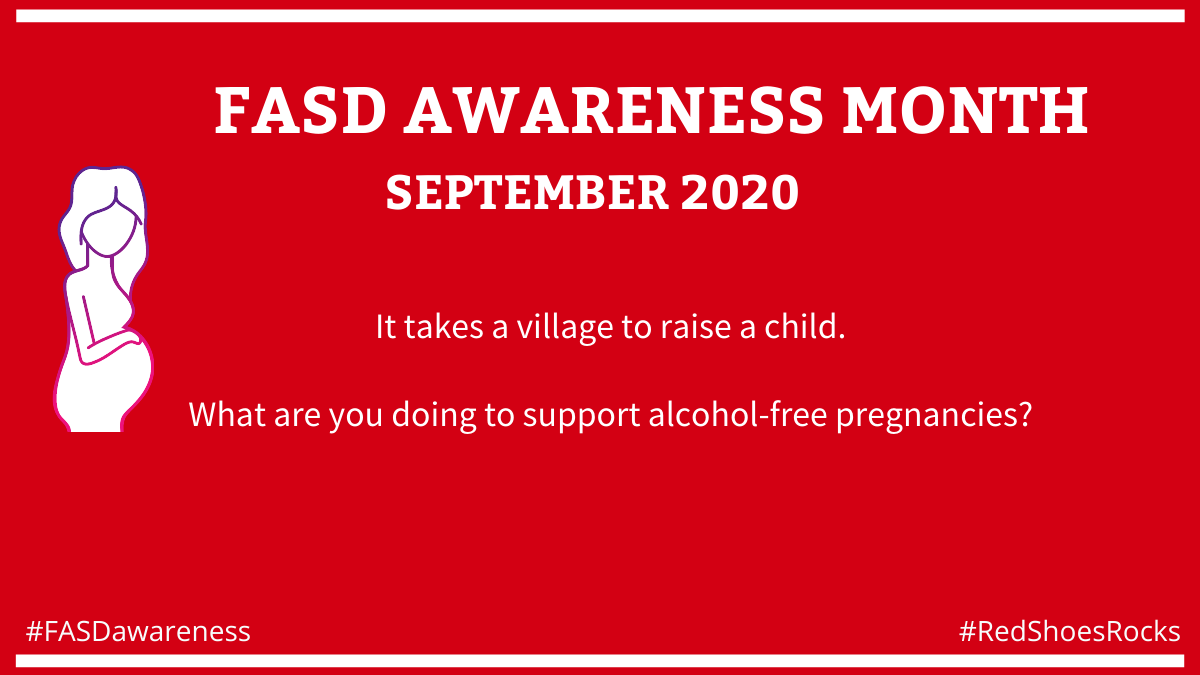 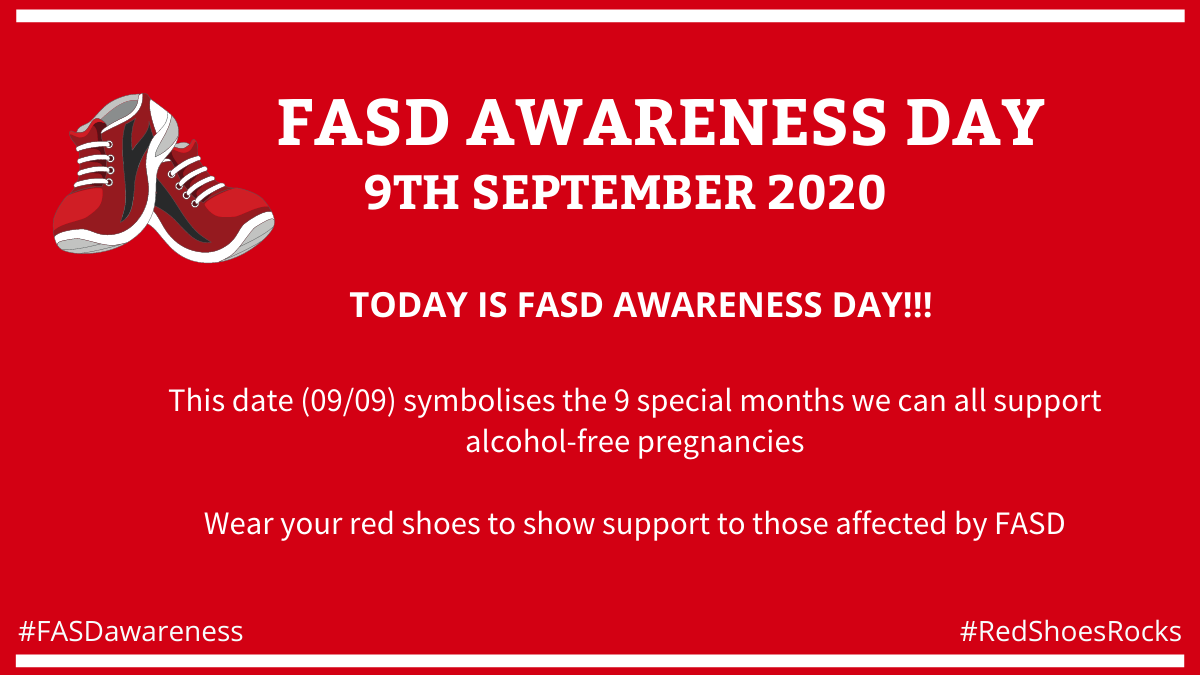 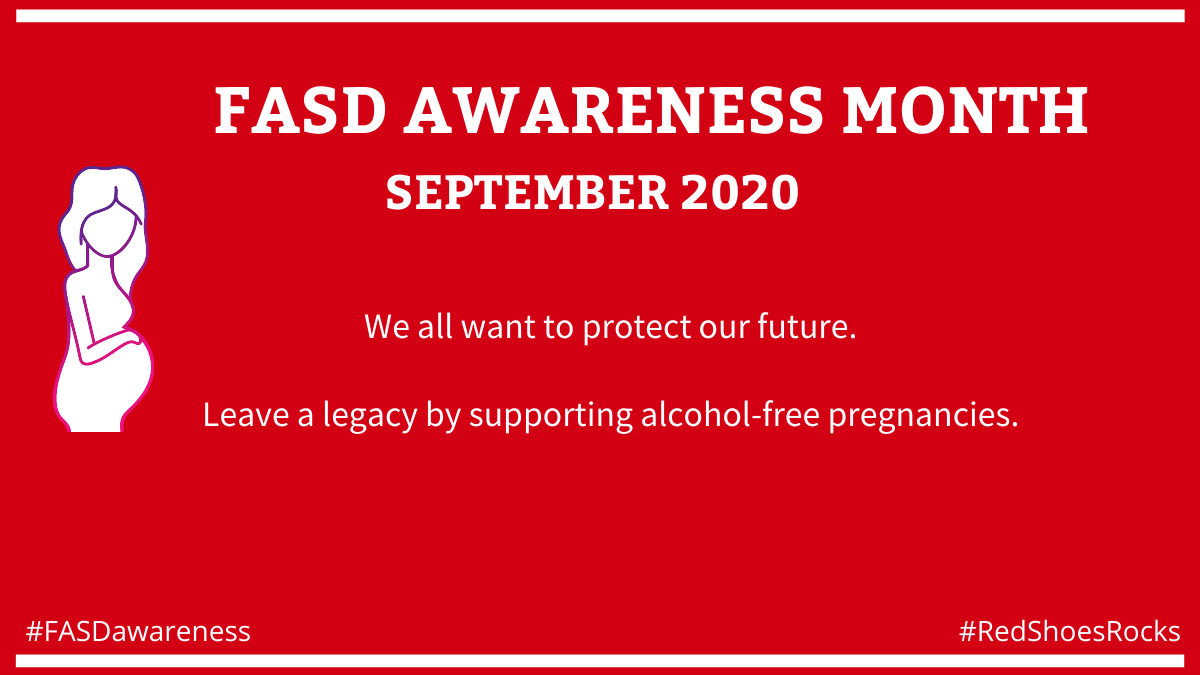 Te Hiringa Hauora (Health Promotion Agency) has developed a digital toolkit of resources that can be used to support your promotional activities for FASD awareness month. You can view the toolkit here.

On the 17th July 2020, Australian and New Zealand Ministers voted for mandatory pregnancy health warning labels giving alcohol producers three years to include the warning label on their products and packaging. Alcohol Healthwatch says that to their knowledge this is the only pregnancy health warning label in the world that includes both a pictogram and specific text, with the warning heading also required to be in red to attract to attention. This label will add to the other actions that are in place to support healthy pregnancies and is another important step to building strong and consistent messaging about alcohol-free pregnancies being the safest option. (Below is an example of the mandated label)

The COVID-19 situation poses extra challenges for most of us, but especially whānau who are under additional financial stress, and people who are affected by harmful alcohol use, whether it is their own or someone else's alcohol use. People may tend to drink more in an occasion, and more frequently, when they feel stressed. Alcohol is known to negatively affect mental health and wellbeing, and plays a key role in violence and family harm. For some people, staying home plus drinking may put them at extra risk.

Alcohol is also the cause of many injuries and chronic illnesses. These injuries and illnesses put extra strain on hospital and health resources. During the COVID-19 response, we need to do everything we can to reduce the alcohol-related burden on our health system.

Kiwis are strong, resilient and kind to others. Below is a list of services you can use if you have any concerns about alcohol:

Lifeline and other mental health helplines

Healthline for health advice on COVID-19

If there is an immediate threat to your safety or the safety of others, please call emergency services on 111.

Please visit https://covid19.govt.nz/ for the most credible and updated health information on COVID-19.

Consumption of alcohol will not protect you from COVID-19! Check out and share the resources developed by the World Health Organization Europe on what you need to know about alcohol at this time.

The above list is not exhaustive, and there is a whole range of organisations not listed here. Please also visit other sections of ActionPoint.org.nz for all kinds of information on alcohol issues and actions you can take to reduce alcohol harm in your community.

Every decision-maker plays a key role in reducing alcohol-related harm and enabling a healthier, fairer Aotearoa New Zealand. By implementing evidence-based policies, we have the potential to improve everything we deeply care about.

With less alcohol harm, we can; improve our mental wellbeing, reduce suicide and family harm, have safer roads and communities, improve our physical health (e.g. fewer injuries, birth defects and cancers) and lift employment and productivity. Every New Zealander stands to benefit as a result of improved safety and substantial cost savings. Our core services and sectors, such as ACC, police, health, welfare and justice will experience significant gains from reduced harm. The possibilities and benefits are endless.

The evidence-based, pro-equity policies listed below will make the biggest difference to shifting our drinking culture and reducing harm in our country, especially to those who are disproportionately affected. This includes women and children, as they suffer the greatest harm from the drinking of others. Pro-equity polices are also needed to uphold our obligations to Te Tiriti o Waitangi, ending the longstanding inequities in alcohol-related harm between Māori and non-Māori.

Download the pdf of the scorecard below or here.

Unfortunately, only a few parties have released their policies so far. Details are available at

You can use our scorecard to see how they measure up. When more parties have listed their policies we hope to provide an update!